In practice, this MARPOL regulation means that ships either need to have scrubbers installed to clean out emissions or change to a low sulfur fuel type when sailing inside an ECA. Due to low sulfur fuel types being more expensive compared to heavy sulfur fuel types allowed outside ECAs, ships tend to carry two types of fuel and alternate between fuels when entering and exiting Emission Control Areas.

Data revealed that ships tend to minimize distance inside ECA

To find out how vessels typically operate in regard to ECAs, we studied a past year of tanker voyages crossing the Atlantic between Central Europe and the US East Coast. My colleague Kimmo Laaksonen blogged earlier, after studying this same dataset, from the viewpoint of how much fuel MR Tankers could save with the help of voyage optimization.

The conclusion was an average 15.9% savings potential in fuel cost on transatlantic voyages. If you’re interested in further reading on how we use the data, more information about the background to how we carry out these retro-optimization studies is available in that earlier blog post. 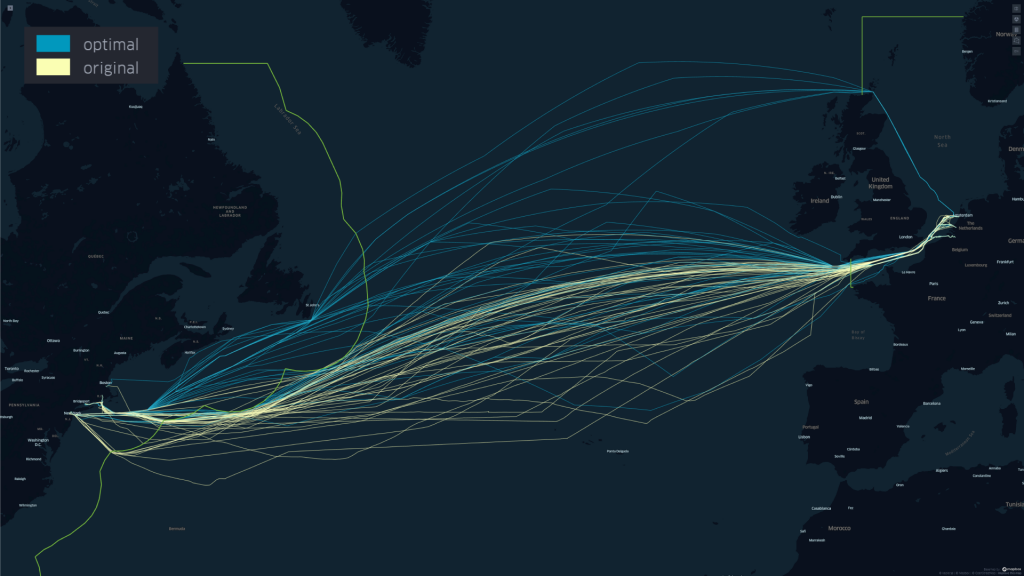 © Kepler, © Mapbox, © OpenStreetMap
Sailed routes reveal the tendency to minimize distance inside ECAs, while the most cost-efficient routes vary.

This suggests that it is common amongst vessels to minimize the distance sailed inside ECA. This optimization logic aims to save costs by simply minimizing the more expensive fuel type. However, is this a model way to save costs if at the same time the total sailed distance may become longer?

Minimizing ECA distance does not always pay off

When retro-optimizing these voyages using the same departure times, arrival times, and weather forecasts available when the voyage was sailed, we found out that the weather routed alternatives had much more variability where they enter or exit Emission Control Areas. This optimization considers the different fuel types inside and outside ECAs, and the different costs of these fuels. Then the most cost-efficient route is calculated. In this study, we used a price difference of 30% more expensive fuel inside an ECA.

As a conclusion of comparing the sailed voyages and the weather routed alternatives, the price difference between fuel types does not motivate purely minimizing the distance sailed inside an ECA. Instead, the weather-routed alternatives would have sailed much longer distances inside the Emission Control Areas and still would have saved an average of 15.9% in fuel cost. Additionally, the optimized routes would have improved the safety of the voyages by reducing, on average, 9.8% time spent in rough weather, BF 5 or higher.

Then again, fuel prices differ – and even more so does the weather.

Therefore, instead of relying on a company policy to minimize ECA distance, it would be better to determine each voyage separately based on the current fuel prices and the current weather forecast.

This blog post was originally published on LinkedIn on April 12, 2021.

Decarbonization in the maritime industry - What it is, and what you can do about it?