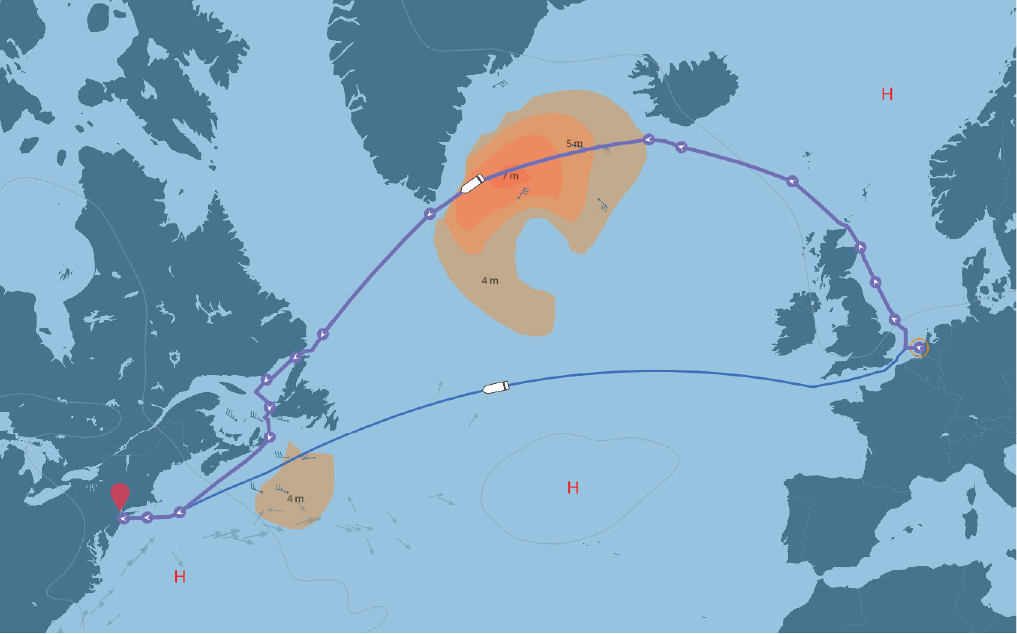 Voyage optimization has empirically demonstrated that it has the capability to provide significant reductions in consumed fuel, and to help choose navigation routes that safely avoid dangerous conditions.

However, even after a ship makes these choices and leaves port for its next destination there will still be an element of uncertainty.

For example, a trans-Pacific voyage of a container vessel takes approximately two weeks and a trans-Atlantic voyage around ten days, and weather forecasts are typically only accurate up to five days in advance.

Similarly, a vessel’s loading condition is a major contributor to how it responds to the motion of different types of waves and environmental conditions. During operation, there will be an uncertainty in the initial stability values of GM, mass distribution, and the consequent rotational inertias – all of which will affect how a ship’s ability to react. Moreover, the applied methods to calculate the motion responses and forces have accuracy limitations.

Further complicating matters is that the safest routes are not necessarily the most fuel or time efficient, and the best choice for the captain and her crew may not be completely aligned with what the operating company or charterer desires. Equally challenging is the knowledge that some decisions are irreversible. If you’re heading west across the Atlantic from north eastern Europe, you must make a choice between the English Channel and the North Sea. Uncertainty about which route is best has traditionally led Masters to choose the conventional route, and this is why NAPA is leading research and development of data-driven voyage optimization technologies which Masters can trust.

The uncertainty inherent in all of these aspects presents overlapping challenges to safe, punctual, and energy efficient navigation. The question we must ask ourselves is: how large a margin of safety does each voyage need?

Certain aspects of route selection are difficult to reverse. For example, if a ship leaves Rotterdam heading for New Jersey, the vessel can head up towards the North Sea or south through the English Channel. If the weather changes substantially once this choice has been made it will be difficult to modify, and it will likely lead to an increased weather risk, delayed arrival, or increased fuel consumption.

At the International Ship Stability Worksop (ISSW2019) I presented a paper titled “On the uncertainties of the weather routing and support system against dangerous conditions.”

It presents methods to clarify our understanding of the aforementioned uncertainties and their sources, and suggests ways in which they can be mitigated or overcome.

If you’d like to read more about these opportunities for performance optimization, you can find the full paper here.